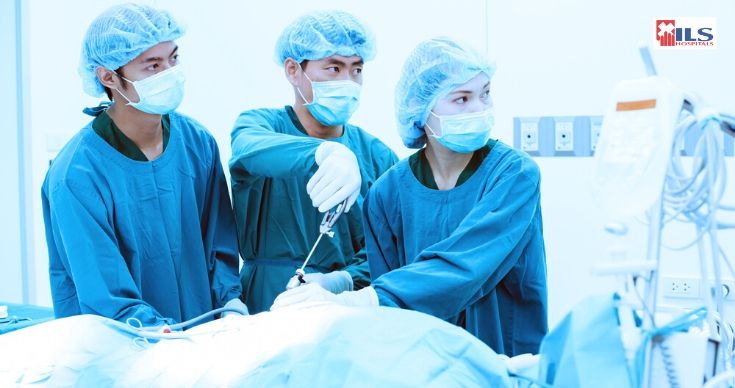 Everything changes with time. Every consecutive day, we find new medical researches setting their mark in the field of medical science. Laparoscopic surgery is the most modern method of surgery after robotic surgery. To perform laparoscopic surgeries, special surgical equipment, expert laparoscopic surgeons, and a computer monitor are required.

ILS Hospitals stands for Institute of Laparoscopic Surgery. We provide minimally-invasive surgeries or laparoscopic surgery to our patients in Kolkata and Agartala. There are countless benefits of laparoscopic or keyhole surgery over traditional general surgery.

Here is a list of some of the laparoscopic surgical procedures available in our hospital units – Dum Dum, Salt Lake, Howrah, and Agartala.

Gallstones are a recurring problem. To prevent gallstones from developing again, we remove the gallbladder (either partially or completely) as a permanent gallstone treatment. Humans can survive without a gallbladder.

Hernia is a common medical condition in our country, India. At ILS Hospitals, we ensure to provide optimum laparoscopic hernia repair surgery to our patients.

Obesity has become alarmingly high in India. To treat obesity and its related ailment we provide laparoscopic bariatric surgery or weight loss surgery to our patients in Kolkata and Agartala. We have performed diabetes surgery successfully on more than a thousand patients.

Laparoscopic Hysterectomy is the minimally-invasive surgery for removal of the uterus (womb). This is strictly done on the account of medical reasons. We are pleased to announce that we offer MIGS (Minimally Invasive Gynaecologic Surgery) to the patients under the guidance of Dr Aruna Tantia.

Monsoon – the time of heavy rain in several parts of India. And needless to say, after the scorching summer, it is a respite. Apart from bringing joys and cool breeze, it also brings us another factor- the cold and flu. Monsoon is after all, highly associated with running nose and sick leaves from work and schools. Many are even seen in the hospitals in Kolkata when their self-medication does not work.

Is there a coherent connection between these two, or it is simply a silly reason to avoid getting drenched in rain. Let’s understand in details

There is an old myth that suggests getting wet in the rain lowers the body temperature significantly and attracts all the symptoms of several illnesses. However, one must remember that flu is caused due to the intervention of virus not due to prolonged contact of water on the body. If it had been true, a long shower or bath would result in flu as well.

So, let’s understand what happens. The rainwater itself does not possess any threat to our health, it is water after all, which we use to clean and freshen ourselves. However, the rainwater is circulated from open water bodies which are exposed to natural and chemical pollution and biological pathogens. Also, during the entire process of the water cycle, it attracts dirt and other airborne pathogens as well. Overall, the rain water is nothing resembling the distilled water, as many people believe it.

Once we are exposed to the rain, the pathogens get an easy pass to spread its count and cause symptoms. However, whether or not we directly get drenched in it, the rainwater certainly wets our clothes, building and other possession that we contact directly. This way, the virus and other pathogens enter our system and start hampering the immune system. The most common monsoon illness are the common cold, viral fever, flu, etc.

Moreover, being in wet clothes for a longer period of time can also lower the temperature significantly and weakens the white blood cells, thus it makes the work of immune system a bit more challenging. So, changing into the dry set of clothes after getting wet is highly recommended along with not eating junk food from the street vendors, which are directly exposed to all the ill effect of monsoon.

Despite all these effects, this season can actually be enjoyed with few precautions and trips to hospitals. So stay healthy and happy monsoon to you!

After withstanding the scotching summer, its now the turn for monsoon to bring the drops of relief. The rainy season bring lots of excitement and fun, but unfortunately, it also brings several infections. Let’s have a glimpse of the illness that strikes the hardest doing the rainy season.

1. Cold and flu – Having a cold and later its progression into flu is quite common during rainy season. Generally, it resolves by rest, over the counter medicine and homemade remedies. But when it persists, it ought to be addressed in a hospital to be on safe side.

2. Malaria – Though malaria can strike any time of the year, especially in the places with low level hygiene such as slums, however, the risk of the same enhances significantly during rainy seasons. The main reason for the same is breeding of mosquitoes in unmanageable water logging and clogging of drains.

3. Typhoid – Typhoid is a very common water borne disease that arises due to the pathogen bacteria Salmonella typhi. It onsets with the consumption of contaminated water. Another prime source is improper sanitation. The symptoms of typhoid such as sore throat, fever headache and weakness are often confused with flu, and thus, its treatment becomes quite tricky.

4. Dengue – Just like malaria, the mosquitoes, namely the tiger mosquito are the vector for dengue pathogen as well. Using mosquito repellents and keeping the body covered can help to prevent the mosquito biting.

5. Jaundice – Though it onsets due to malfunctioning liver, Jaundice is yet another disease that often onsets during monsoon. Mainly due to consumption of contaminated water and food. The disease can be easily distinguishable due to yellowing of skin, nails and sclera of eyes.

6. Cholera – It is more than just a disease, it is a threat that used to wipe clean the population of entire geographic clan in earlier days. Thankfully it can be controlled to a large extent these days. However, since it spreads due to contaminated water and food, its occurrence is most probable during monsoon.

7. Viral fever – As clearly the name suggests, viral fever is caused by virus pathogen which are most active during the rainy season. It weakens the overall immune system of the individual and makes them prone to have several other illness as well.

8. Diarrhea – Yet another illness that occurs during the rainy season mostly due to the consumption of unhygienic food and drinks. It causes severe loss of fluids from the body and leaves the body very weak and susceptible.

Though these are the most common possible diseases that can strike during the rainy season, several others might attack as well. It is best to practice caution and care to stay in good health.