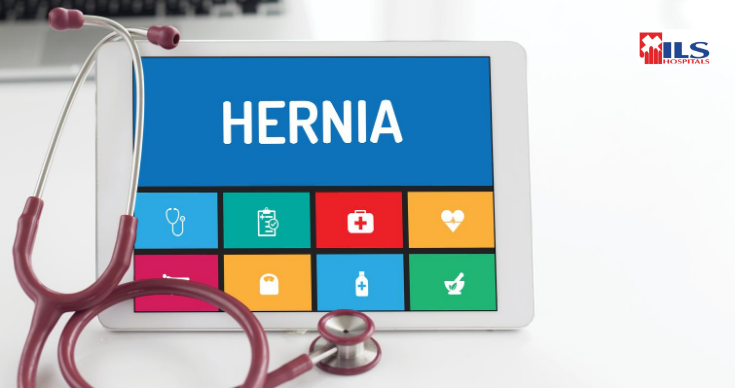 A hernia is an abnormal protrusion of tissue or an organ that generally occurs in the abdomen or groin region.

Many people have the misconception, that there is only one type of hernia – groin hernia. Today, ILS Hospitals, one of the best hospitals in Kolkata and Agartala will let you know the different types of hernia and its ultimate medical treatment. So, let’s read further.

Often called groin hernia, inguinal hernia happens when tissue (part of the intestine) protrudes through a weak abdominal opening. Inguinal hernias can be painful when you cough or lift a heavy object.

Hiatal hernia is a medical condition in which your stomach bulges up to your chest through hiatus (an opening in the diaphragm. Common symptoms associated with hiatal hernia include heartburn, chest pain, nausea and vomiting.

Incisional hernia can happen in case of an incompletely-healed surgical wound. Incisional hernias have symptoms, such as redness, pain, and swelling around the affected area.

Sports hernia may occur in the groin due to sports injuries. It should not be confused with groin hernia.

An umbilical hernia is a hernia of the belly button. It mostly happens in infants, pregnant women, and the ones who are overweight.

The only effective treatment for a hernia is hernia repair surgery. Of course, you’ll find hernia truss or belts in the market but keep in mind that they are no permanent cure. If you have a hernia, you need to get surgical hernia treatment as sooner as possible. The hernia repair surgery could be either general or minimally-invasive (laparoscopic) depending upon your current condition.

You can come to ILS Hospitals in Kolkata and Agartala for getting permanent hernia treatment.

The laparoscopic surgery is an advanced surgical technique that overcomes several negative aspects of traditional open surgery. It is also known as MIS (minimally invasive surgery), Band-Aid surgery or Keyhole surgery. It is executed by making few minor incision, instead of making a large slit across the site.

Let’s have a look at few of its aspect and importance in the field of medical science.

The Procedure of Surgery

Though laparoscopic surgery can be executed for several domains, the most common ones are done in the abdominal region. After the anesthesia is administrated, the surgery begins by making a single incision first, through this a cannula in inserted and carbon dioxide is used to inflate the stomach. Though the abdomen does have some of it already, but often extra is pumped in order to make the surgery more convenient.

After the administration of carbon dioxide, the outer layer of the stomach inflates, creating enough working space for carrying out the surgery. Few more incisions are made through which other instruments, camera and light source etc. are inserted. The real-time feed and movements are tracked and displayed on the monitor in the Operation Theater.

The displayed images are of extremely high resolution and can easily be zoomed in and out and moved around for better visual and for carrying out the procedure. The part of the instrument extended outside the body can be moved accordingly to make the desired movement inside. These include making dissecting, stitching, perforating, stapling, collecting and extracting portions of dissected diseased organs.

After the completion of the procedure, nearby organs re-checked for any signs of possible damage or infection. Upon assurance, the instruments are retracted back and the gas is extracted back in order to retain the abdomen, its original shape.

Laparoscopy is a diagnostic as well as a surgical technique which can be used to assist surgeries in the following domains, such as

As a diagnostic tool, it is helpful to check several medical aspects, without perforating the organ or making things worse. It is used for the following purpose

In a nutshell, it is the top-notch surgical approach that is replacing the traditional surgery these days.