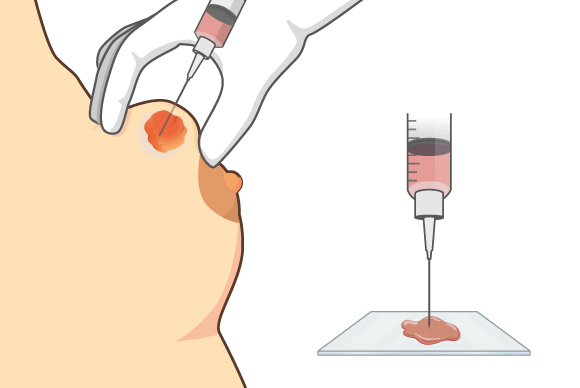 Breast cancer is a leading cause of death among women all around the globe. The scenario is equally frightening in Indian as well. The detection of malignancy in the breasts happens in later stages in India, and that is why breast cancer treatment is not very effective for many women.

Timely screening can confirm whether or not it is a case of cancer and thereby, the suitable treatment can be pursued, if needed.

Gynecologists recommend that every woman above the age of 30 should pay attention to any changes that occur in their breasts. Let’s understand about one such crucial screening, the FNAC, in details.

FNAC stands for Fine Needle Aspiration Cytology. It is a diagnostic screening that can detect the malignancy in the breast tumor. It can also be used to aspirate a known cyst, by pricking and collecting fluid. It is done to remove the cyst completely or to relieve discomfort and pain that is quite common for large cysts.

How FNAC is carried out?

FNAC uses a thin needle to penetrate the breast tissue to reach the site of the tumor. The exact position of the cyst or tumor can be detected using ultrasonography and the needles are guided accordingly. It collects some cells or fluid as a sample. The sample collected is then sent to the laboratory to investigate its nature further.

This usually does not require any anesthesia, because even if the procedure requires pricking the breast with needles, the pain is bearable. However, it might require the same, if a solid system is concerned, which required multiple aspirations, in a single screening procedure.

Prescribing an FNAC does NOT mean the doctor suspects breast cancer. In fact, mostly it is the opposite. Usually, when they come across any lump during a physical exam and suspect it to be a harmless, benign tumor, the first thing they recommend is the ultrasound and closely followed by FNAC.

The reason for recommending USG as foremost screening is simply to get the exact location of the lump. The FNAC test simply rules out the possibility of cancer. In case, it shows hints of malignancy, a biopsy is then recommended, which confirm the presence and type of malignancy.

So, why does the gynaecologist, does not recommend biopsy in the first go itself? Well, simply because FNAC is less invasive than a biopsy. A biopsy requires proper anesthesia as is a little more severe and sort of unnecessary for benign tumors.

What happens after FNAC confirms the nature of the tumor?

Well, if it shows malignancy, which is quite rare, the gynecologist is likely to refer the patient to an oncologist for advanced breast cancer treatment. In case its benign tumors, it can either be aspired to relived discomfort or left intact in the place (unless it projects any more trouble in the future) or it can be removed by surgery anyway.

For more information, if required it is wise to get in touch with a gynaecologist and discuss the possibilities.