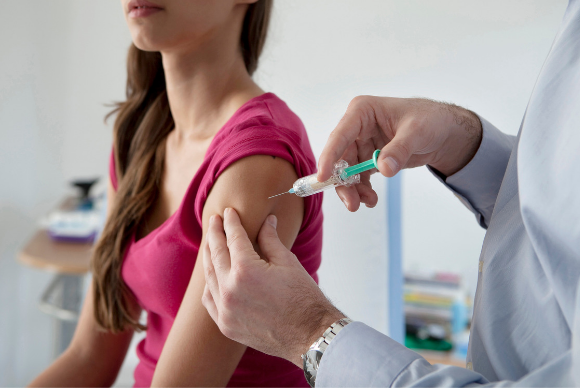 Cervical cancer is the second most common form of cancer in women in India, after breast cancer. Cervical cancer refers to the malignancy found in the cervix (the lowermost portion of the uterus) of the reproduction system in women. Though cervical cancer affects older women of age 50 or above the most, many gynecologists confirm that women with the same have been diagnosed in their early 30s as well. Let’s understand regarding many of its aspects in details along with cervical cancer vaccination.

Cervical cancer might project no symptoms at first, but the advanced stages often show some symptoms such as vaginal discharge with blood or strong smell, bleeding in postmenopausal women or during times other than on periods, pelvic pain and so on. Though these symptoms might indicate some mild infections as well, it is always wise to get it checked to rule out the possibility of cervical cancer.

Cervical cancer occurs due to Human Papillomavirus Infection (HPI). It can be prevented effectively with the HPV vaccine. It usually takes 2 to 3 shots to complete the dosage. It is usually advised for young girls of age group 9-15, but can also be recommended to women reaching until the age of 25 or even more. A thorough consultation is advised to consider the same with an expert gynecologist, in depth.

Cervical cancer vaccination is not fully effective for women above the age of 25, particularly if they are already sexually active (It is true for even the younger girls). The reason being, the vaccination loses its effectiveness as women grow older, and moreover being engaged in sex, might already have exposed them to the infection, makes will make the vaccine considerably. However, the HPV vaccine can help prevent many other diseases of the reproductive tract as well.

Cervical cancer vaccination offers protection malignancy in the cervical region. But as HPV virus also can cause cancer in the vulva and vagina, this vaccination protects the women against these as well along with genital warts.

However, there are other measures that can help with early detection of cervical cancer too. Pap smear is a screening that collects sample cells from the cervical cavity. It is then evaluated under a microscope. In case they exhibit any changes in their structure, it might be indicating cancer and thus, timely treatment options can be availed for it.

HPV vaccination is effective and safe. The only side effects that have been found in some cases are pain, swelling, and redness in the site of the injection. However, these are mild and temporary and overall, its advantages surpass the mild discomfort.